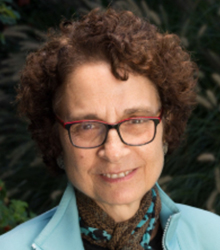 Dr. Golden has more than 44 years of experience as an educational leader in Oregon.

She is currently the first Professor of Practice at the College of Education at UO.  In this role, she aligns her years of experience in the field with world class researchers to impact Oregon ‘s graduation rate.  She was Oregon’s Chief Education Officer until September 1, 2015. She began her career as a special education teacher in 1974.  She formerly served as the superintendent for Springfield Public Schools in Springfield, Oregon from 2003-2013. In 2011, she served as Educational Policy Advisor to the Governor and was selected as Oregon’s Superintendent of the Year.

Nancy is highly regarded for promoting equity in schools. She was one of two winners of the 2012 Tom Ruhl Leadership for Equity Award by the Oregon Leadership Network; in 2009. She received the Springfield Alliance for Equality and Respect’s Human Rights Leadership Award.

Ph.D., Curriculum and Instruction, 1987
University of Oregon, Eugene, Oregon
Dissertation title: The Use of a Computer Networking System to Obtain and Analyze Group Responses during Classroom Lectures

2016 A Champion in Education (ACE) Lifetime Achievement Award, presented in recognition of a lifetime of exemplary work in public education by the Eugene 4J, Bethel and Springfield School Districts.

2016 Turtle Award, Presented by the City Club of Eugene in recognition of her willingness to “stick her neck out” to achieve an important goal in the area of equity.

2016 University of Oregon Outstanding Alumni Award, presented in recognition of alumni for significant contributions in education and other fields that have had a national impact on educational policy, professional practice, community service, research or scholarship.

2012 Tom Ruhl Leadership for Equity Award
presented in recognition of integrity, heart and passion exemplifying the attributes of an outstanding educator

2011 Oregon Superintendent of the Year Award
presented in recognition of success in every level of leadership, tremendous commitment and energy to every position held and for making a positive difference in the lives of children, parents and educators, 2011.

Oregon Commission for Women, Women of Achievement Award
presented in recognition of work to significantly improve the lives of women in Oregon, 2009.

100 District Leaders for Civic Engagement and Service-Learning
selected to participate with a network of national educators to provide a national voice to help strengthen the commitment of leaders as they create and foster effective citizenship education, 2008.

2006 Bev Gladder Mentorship Award
presented in recognition for inspiration and leadership by colleagues from around the state, 2006.

2005/06 Distinguished Service Award for State Action for Education Leadership Project
In recognition for work to establish new guidelines for teacher training and licensing and promoting partnerships to increase student achievement, 2005-06.

University of Oregon, Leading Into Leadership Award
Presented in recognition of positive & sustained influence on the lives and learning achievement of children, 2005.

Springfield Rotary, Vocational Service Recognition Award
presented in recognition of outstanding vocational service to the Springfield community and its children, 2005.

University of Oregon, Award for Leadership
presented in recognition of outstanding contributions to the field of Educational Leadership, 2004-05.

Oregon Association of Central Office Administrators (OACOA), Achievement of Excellence Award for Leadership in Curriculum and Instruction, given by the Confederation of Oregon School Administrators (COSA), 1997.

Excellence in Educational Leadership Award, given by the University Council for Educational Administration (UCEA), 1997.

Educational Excellence Award from Santiam Region, given by the College of Education Alumni Society (COEAS), 1997.

LislWaechter Award, given by the Arc of Lane County, 1993.